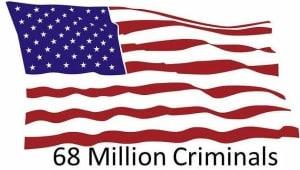 “68 million people living with convictions – more than the entire population of France. We are in danger of becoming a nation of criminals, because we are policing from a place of fear.”

This quote was taken from Rick Jones, executive director of Neighborhood Defender Service of Harlem when he testified on June 26 on behalf of the National Association of Criminal Defense Lawyers.

Here is the link to the story and quick video: http://truthvoice.com/2015/09/68-million-americans-have-criminal-records-more-than-population-of-france/

68 million people living with a criminal record in the United States equates to about 25% of the US adult population. It is unconscionable that 1 in 4 American adults have some sort of criminal record.

Thankfully some states like California, Oregon, Ohio, Minnesota, Indiana and more have somewhat progressive laws that allow those with a criminal past to potentially expunge their convictions. In order for ALL states to adopt progressive laws for their citizens, we must constantly urge our representatives to pass new laws. Some studies have shown that once a record has been expunged, that person has a much easier time applying for a job, a place to live and/or a loan for a home or business. Once we get ex-offenders back into the workforce, cities, counties and states should see the financial benefit.