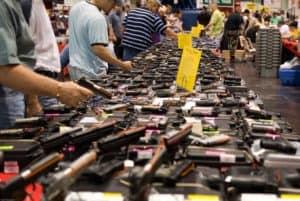 Following the November election, gun sales in America are still at an all-time high. The Federal Bureau of Investigation’s National Instant Background Check System (NICS) processed more background checks for gun transactions on Black Friday than on any single day since the system launched nearly twenty years ago. A total of 185,713 NICS searches were conducted on Black Friday in response to potential gun buyers. Incredibly, the FBI processed 2.56 million background checks in November, setting another record for the month and pushing 2016 to a new all-time high.

Many analysts thought gun sales might settle for a bit after the election of Donald Trump and Republicans taking control of Congress. However, with one month to go in 2016, the FBI’s NICS has handled 24.76 million checks this year, surpassing the previous annual record of 23.14 million recorded last year. The recent shift in political power apparently hasn’t slowed the demand for guns in America. For more than a year before the election, gun sales increased with the incidence of several mass shootings and the possibility of a Hillary Clinton presidency. Citizens became fearful of stricter gun control laws, and therefore they went out and bought firearms and ammunition in advance. The boom of sales in 2012 and 2013 were in response to a spike of lawmakers pursuing additional regulations on gun purchases. There has been a rush of gun sales since the second half of 2015 because of concerns over terrorism and the presidential race.

Because there is no official database of gun sales in the U.S., the NICS checks are considered to be one of the most accurate indicators for gun sales because nearly all sales made through federally licensed firearm dealers require a check by law. The number of NICS checks do not represent the exact amount of sales for a few reasons. For example, some states require NICS checks for concealed carry permits, and many states do not require the NICS check for sales between private parties. Furthermore, there are many people that get their NICS check ran by a gun dealer who ultimately cannot buy a gun because it is determined that they are prohibited by law from purchasing or possessing firearms. Still, most gun buyers have their backgrounds checked by the NICS system in order to legally and lawfully purchase a weapon from a federal firearms licensed (FFL) dealer.