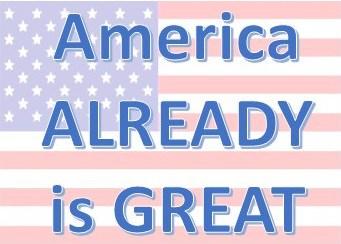 America Is, Has Been, and Will Continue to be Great

To some Americans, “The Donald’s” campaign slogan is somewhat confusing. The slogan, “Make America Great Again,” (a recycling of President Reagan’s campaign slogan) has made waves across every medium you can think of – from Television, the Internet, Cable News, and to the few dying Newspapers.

The reason to take umbrage with this slogan is that America is a great country and will continue to be a great country. As the saying goes in the news world, “if it bleeds, it leads,” meaning that the most extreme views and scenarios will get airtime because viewers are likely to be drawn into giving our undivided attention to the medium. Mr. Trump has built his campaign on bleeding sound bites but his slogan is not completely accurate.

Let’s focus on 2 reasons why American is the greatest country on earth.

We have a 2nd Amendment that allows citizens to own and possess firearms. Whether it be for hunting, protection, or collecting, every law abiding citizen has that right. This is an incredible characteristic of our Republic! The notion of walking into a gun shop and purchasing a firearm is unheard of in most countries. Not only that, but Americans can also restore their firearm rights if they have been lost. Those with a felony conviction or a misdemeanor crime of domestic violence conviction are prohibited from owning a firearm. However, states have been progressive in enacting policies that allow some non-violent offenders to regain their firearm rights (and other rights, such as the right to vote). This is an amazing step toward the interests of justice! It is a testament to the American legal system that we have procedures in place to allow deserving American citizens the ability to reinstate 2nd Amendment rights. That is one reason that America is, has been, and will continue to be Great.

In many countries throughout the world, if you are convicted of a crime, you’re out of luck. In other words, governments don’t believe in second chances for convicted people. This is a once a criminal, always a criminal mentality. We live in the land of opportunity, but that opportunity is foreclosed to the millions of Americans with criminal convictions. So the question remains: should a bad decision once made at an earlier time in someone's life limit them forever? We don’t think so, and many state legislatures agree. Along with restoring firearm rights, states allow for criminals to expunge their record (or seal it/vacate it – depending on your state vernacular), and move toward putting the past behind them. States realize the social and economic benefit of allowing criminals to expunge their record so they can get back into the workforce and become a productive member of society. Indiana is among those states which recognize the importance of this legal service, having what is called the “2nd Chance Law”. This alone is a clear example of greatness having already been established.

We should be proud to live in such an amazing country that allows for the clearing of criminal records as well as the restoration of firearm rights.

Do you think our country is Great? Or do you think it needs to be made Great Again?