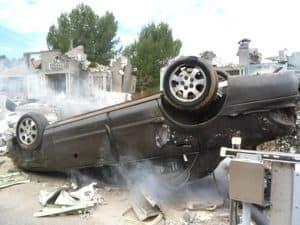 For some convicted felons, the end of your criminal record expungement process can be a sigh of relief. With the rewarding benefits and the weight of your past lifted off your shoulders, you feel that you can finally get back to living a normal life. You may be asking yourself, what is a gratifying way I can contribute to society? Look no further than Connecticut native Aaron Tucker.

Tucker had been newly released from jail, and had managed to land himself a job interview. On his way to it, Tucker noticed that a car had hit a nearby tree and flipped over. About to hop on the bus, Tucker decided to dash over to the totaled car to see if the driver was okay. Seeing that the driver appeared to be severely injured, Tucker unbuckled the driver’s seatbelt and was able to drag him away from the car before it caught on fire. As soon as others arrived to help, Tucker continued to stay with the injured driver, reassuring him that he would be alright.

Deciding to skip his job interview, Tucker stayed with the driver until an ambulance arrived. “I feel like a job can come and go, but life is a one time thing,” Tucker said. “The job just wasn’t on my mind at that time.”

Community members who read about Tucker’s selfless act in the local newspaper wanted to pitch in to help get his life back on track. They quickly set up a GoFundMe page to help raise money for Tucker, and within a day the page had raised over $16,000. Other local activists also stepped in to spread awareness of Tucker’s act through social media, so that they could organize donation drives of food and clothing to be given to Tucker and his newborn son.

Soon after the story was shared, numerous local jobs came calling to Tucker, as he prepares to build a better future for his life and his son. (Source: CBS News)

Selfless acts like Tucker’s are prime examples of how ex-cons can make a positive impact on their community. Getting involved with local charities, volunteering with educational and state programs, and overall finding ways to give back to the community are routes in which these individuals are encouraged to take. Not only will it look good on job applications, but it will help inspire others in similar situations that they have the right to control their lives and their future.

To learn more about your criminal case and expungements, contact our team of experienced attorneys at 844-947-3732.