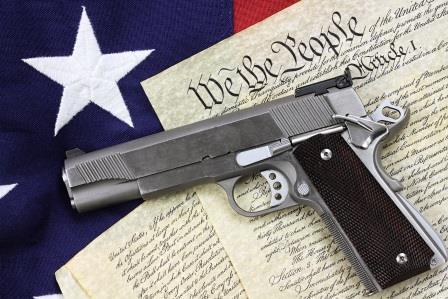 Can a Felon Own a Gun?

One of the most controversial Amendments, if not the most controversial, is the Second Amendment – The Right to Keep and Bear Arms. It has created a heated debate among politicians for many years. At WipeRecord, many times we are asked whether a felon can own a gun. The general answer to this question is: no. There are state and federal laws which affect an individual’s gun rights. In some cases, state law may allow for the reinstatement of firearm rights while federal law does not. However, the federal government largely differs to states when reinstating gun owner’s rights. Therefore, it is possible for some felons to reapply to have their firearm rights restored.

In 1968, the Gun Control Act (“GCA”), a federal law, was signed into law by President Lyndon B. Johnson which prohibited most felons and convicted drug users from buying a firearm and it also prohibited the mail order sales of rifles and shotguns. The GCA is an important law if you are a convicted felon, because you may not own or possess a firearm unless your rights are restored. Felons who have lost their rights have also forfeited the ability to purchase ammo. The federal statute prohibits possession of “any firearm or ammunition.” 18 U.S.C. § 922(g). “Ammunition” is defined as “cartridge cases, primers, bullets, or propellant powder designed for use in any firearm.” 18 U.S.C. § 921(a)(17)(A).

While some states like Arizona and Ohio make it “easier” to restore rights, it’s best to understand that the process is largely discretionary. Here are some links to other blogs that provide greater detail regarding who is eligible to restore firearm rights in specific states:

The federal prohibition that applies to domestic violence misdemeanants was adopted in 1996 and is commonly known as the “Lautenberg Amendment” after its sponsor, the late Frank Lautenberg (D-NJ). The Bureau of Alcohol, Tobacco, Firearms and Explosives (ATF) takes the position that “if the conviction was set aside or expunged; the person was pardoned; or, the person’s civil rights – the right to vote, sit on a jury, and hold elected office – were restored,” than it may act as an exception to the law.

Therefore, in some states a court petition or an expungement can restore rights to someone federally prohibited under the Lautenberg amendment. You should consult with an attorney to determine whether your rights can be restored.

Recently, the House of Representatives passed a bill that would allow non-violent felons to own a gun. The bill was championed by Colorado Republican Rep. Ken Buck. This has yet to be passed in the Senate. Please check back for updates.

If you have lost your rights and wish to restore them, the first step is to see if you’re eligible by taking the firearm rights eligibility test.