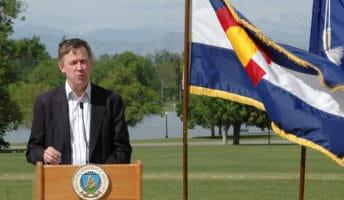 Last week, Colorado Governor John Hickenlooper (D), gave a pardon to a Cuban immigrant for an armed robbery he committed at a Blockbuster video store in 1998. Rene Lima-Marin came to the U.S. during the 1980 Mariel boat lift from Cuba. Despite obtaining legal residency, Lima-Marin was convicted in 2000 and was sentenced to 98 years in prison.

In 2008, Lima-Marin was put on parole. Following this, he married and had a child until 2014, when state authorities realized they had mistakenly put him on parole, and so he returned to prison to serve the remainder of his 98-year sentence.

Before the pardon, a Colorado judge ordered that Lima-Marin be released from prison. Before he could return to his family, Lima-Marin was picked up by immigration authorities, due to his active deportation order from when he was convicted in 2000.

The case of Lima-Marin became a bipartisan cause celebre in the state of Colorado, with 98 members of the State Assembly voting to have Governor Hickenlooper grant him his release. Because of the Trump administration’s swift actions to crack down on deportations, Governor Hickenlooper called the case, “A question of Justice.”

Despite the governor’s pardon, District Attorney George Brauchler, who prosecuted Lima-Marin, believes that Hickenlooper did not follow state law by not allowing prosecutors the proper time to look over the pardon. “The hasty decision to ignore state law was made seemingly to skirt federal law, and that is not an appropriate use of the governor’s power,” Brauchler states.

ICE spokesman Carl Rusnok believes that the pardon would not be enough to stop Lima-Marin’s deportation, and former Blockbuster assistant manager Jason Kasperek thinks that Lima-Marin should remain in prison. “I think it’s completely ridiculous. It’s unjust for all victims who have been involved in it,” Kasperek says as he recalls Lima-Marin holding a rifle to his head at the time of the robbery.

Back in January, former President Obama ended exemption for Cuban immigrants who arrived in the U.S. without a Visa, calling it the Wet Foot-Dry Foot Policy, so additional immigrants from the Mariel boat lift may face deportation. (Source: Yahoo)