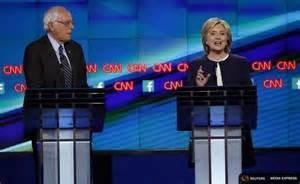 The first Democratic Debate was hosted by CNN last night in Nevada. Among the many talking points were gun control, social security issues, jobs and more. One moment stood out when one of the moderators asked Democratic Presidential hopeful, Bernie Sanders, about Marijuana legalization and recreational use in Nevada. When asked how he would vote on the 2016 ballot, here’s how Sanders replied:

I suspect I would vote yes. And I would vote yes because I am seeing in this country too many lives being destroyed for non-violent offenses. We have a criminal justice system that lets CEOs on Wall Street walk away and yet we are imprisoning or giving jail sentences to young people who are smoking marijuana. I think we have to think through this war on drugs, which has done an enormous amount of damage. We need to rethink our criminal justice system and we’ve got a lot of work to do in that area.

Clinton was a little more reluctant to say she full on supported recreational use but rather supported medical marijuana use.

You can watch her response here: https://www.youtube.com/watch?v=7PMK90di9gI

Both Sanders and Clinton did express that they need to reform the criminal justice system and that we as a nation have to stop imprisoning marijuana users. The overall sentiment was that the war on drugs has not been successful and that too many people’s lives have been ruined because of it.

This is a huge step in the right direction. Whether you support recreational or medical use for marijuana or you don’t support it at all, it’s great to know there is a constructive conversation happening with the Democratic candidates. Let’s hope this is not lip service and they go back to “business as usual” if one of them is elected.

Washington and Colorado have legalized recreational use and soon Oregon will officially legalize for recreational use too. In fact, soon you can expunge most marijuana related offenses in Oregon.

At WipeRecord, we are huge believers in helping people get a second chance in life. If you made a mistake when you were younger, you shouldn’t have that hanging over your head for the rest of your life. Why should a marijuana arrest prevent you from gainful employment or even a place to live? Luckily many states have progressive expungement laws that allow those who made a mistake to expunge or seal it. The criminal justice system will not be changed overnight but the fact that a meaningful dialogue is happening makes us very optimistic.