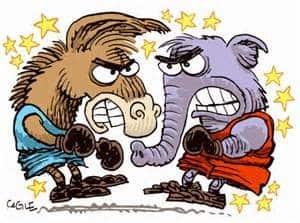 The 2016 presidential election is already shaping up to be an intense match between the donkey and the elephant parties. While it’s way too soon to predict any front-runner for either party, several issues have already made their way into the talking points on both sides. There are the trite talking points that arise every election such as jobs, the economy, climate change and our national security. Then there’s a new talking point that both sides are chiming in on and they both seem to be saying the same thing: America needs some type of criminal justice reform. We welcome this bi-partisan attention to an issue that so desperately needs to be on the forefront of campaign issues.

Inimai Chettiar wrote a great opinion piece for Al Jazeera about how the current Presidential candidates feel about criminal justice reform. Everyone from Bernie Sanders to Chris Christie have laid out some sort of reform that should help reduce incarceration rates for certain types of offenders. We have seen some reform recently in some states such as California, Ohio, Minnesota, Oregon, Indiana and others but we need more. Some states like Texas have passed new legislation to help first time offenders (Senate Bill 1902).

I agree with Chettiar. We need more states to realize incarcerating non-violent offenders not only dampens the future of the inmate but it also hurts society. We should be offering treatment for non-violent drug offenders – not prison time. President Obama visited a federal prison, the first sitting President to do so, and he’s made a big push for criminal justice reform. As a nation, we need to take immediate action. We continue to fill the pockets of big corporations who have privatized the prison system. Adds Chettiar, “Probation, community service, electronic monitoring and psychiatric or medical treatment have all been proved to reduce recidivism while being less expensive than incarceration.”

Because the majority of offenders are incarcerated and convicted at the state level, a Federal movement towards criminal justice reform is not enough. Changes need to me made at the state level. The best way to make your voice heard is to urge your local representatives to make real efforts toward criminal justice reform, such as increased funding for alternative courts, reduction of low-level non-violent offenses to misdemeanor, and elimination of mandatory sentencing laws.

I encourage you to read this article linked below and make sure that criminal justice reform stays a talking point with our candidates and serious action is taken with the next President.