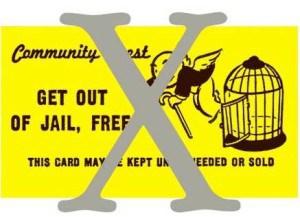 Get Outta Jail Free Only Happens in Monopoly

One may think that when you’re set free from prison or jail, you can begin a new life. We all see that in the movies, right? When the character walks out from the high prison walls and gets into a car and begins his/her new life without a care in the world. That’s what they call movie magic. Just because you were set free or allowed to walk, you will likely still owe exorbitant fines and costs.

In most states, defendants and prisoners are required to pay “user-fees.” User fees have been designed to fund the courts. In many states the court systems are drastically underfunded, and law makers have pushed the costs of running the court and criminal justice systems to the defendants. This is an entirely unfair and misguided attempt to balance the budget. The court fines and costs add up to thousands of dollars per criminal case. Some people are in debt tens of thousands of dollars when they leave prison or upon discharge from probation. If you ever miss a payment your assistance can be suspended, or you could lose your driver’s license, or even worse, you go back to jail. The system of imposing impossible fines and costs for criminal cases has been under fire lately. There is a valid argument that these fines and costs criminalize being poor, and are creating “debtors prisons”. It inappropriate, unfair, and arguably unconstitutional to incarcerate people simply because they don’t have the means to pay these fines and costs.

NPR’s Joe Shapiro goes into detail in his conversation with a fellow colleague about these user-fees and and what they fund:

It has reached the point where the court, jail, and prison systems cannot process the huge volume of criminal cases that are filed. Instead addressing the reasons why the criminal justice system is overburdened, states are simply passing on the costs of running the government to offenders. This is a backwards approach to addressing mass incarceration and the foolishness of our current drug policy. Instead of throwing more money at a broken system, we could evaluate how to revamp our drug laws on the state and federal level. In 2013, 489,000 people combined were behind bars (federal and state prison and jail). Compared with only close to 41,000 back in 1980.

States like Oregon, Alaska, Colorado, DC and many others are starting to move in the right direction with marijuana laws by making the use and sale of these drugs legal and taxable. In Oregon, starting on Jan 1, 2016, criminals with any sort of marijuana conviction (save driving under the influence) will potentially be able to expunge their record. This is a monumental move on behalf of Oregon and more states need to follow suit. It is states like Oregon that will help decrease the costs of incarcerating criminals and should significantly reduce or eliminate user-fees. Imagine if we were able to reform our nation’s federal and state laws so that we are not wasting tax dollars on locking up non-violent drug offenders who are simply in need of rehabilitation. We would absolutely see more people contributing to the work force and local communities. We need to give people a second chance.

Many people who come out of the system don’t have the funds to pay these user-fees. So what do you do if you need to make payments? You apply for a job. Many people cannot get a job after they get out of jail or prison. Even if you don’t go to prison, but have a criminal record, you still may not be able to get a job because employers don’t like hiring convicted felons. Although the options are limited for ex-offenders, the best thing to do is explore how to expunge your criminal record with a reputable law firm.