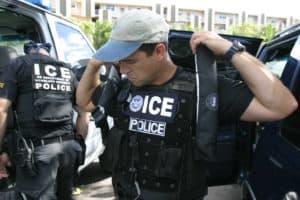 Doubling Down on Deportation

Immigrants in the New England area who are without a criminal record appear to be a prioritized target by U.S. Immigration and Customs Enforcement (ICE). Arrests of non-criminal immigrants living in New England without proper authorization has more than tripled this year alone. These mass arrests appear to be in line with the Trump Administration’s focus on deporting immigrants without documentation out of the country.

Strike One, And You’re Out

President Trump’s executive orders have made it clear that priorities for ICE not only include serious criminals, but also one-time offenders, like individuals whose only offense was entering the country without proper authorization.

Sarah Sherman-Stokes, a clinical instructor at Boston University’s Immigrants’ Rights and Human Trafficking Program, is concerned about this upward trend in arrests of non-criminals. “When the system of priorities collapses on itself, as it has done under this administration, how does law enforcement focus on serious threats if they’re focusing on everyone?,” Sherman-Stokes says. “It’s impossible.” This year, the Trump Administration hopes to increase the number of ICE agents and border patrol by 15,000, as part of their process in enforcing these new immigration priorities. (Source: WBUR)