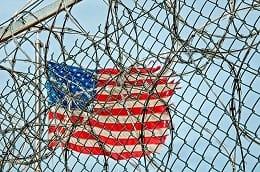 Imagine you just lost your job and on top of your family being hungry, you have bills to pay. Your life is starting to fall apart all around you and you can’t find a way to produce any income to support your family. The old saying “you gotta do what it takes to feed your family” really brings on a new meaning. If you can’t find a job anywhere and are about to be out on the cold hard streets without a windfall of money, what are you going to do? Well, this situation unfortunately affects tens of thousands of Americans every year. Some individuals turn to petty theft, robbery, and selling drugs as a last resort to survive. So, for the sake of this story, let’s say you were caught selling marijuana in a state where it is illegal. You are convicted of a felony and your rights to vote and own a firearm vanish. You serve a small 2 year sentence in a local prison. You get out of prison and you live life on the straight and arrow for many years. Your son now gets married and has a child. As a grandfather, you want to spend time with your grandchild and teach him things such as riding a bike, the value of hard work, and even want to take your grandchild on a hunting trip. One problem – you can’t own a gun because you’re a convicted felon that went to prison for a non-violent charge a lifetime ago.

This situation affects Americans in every state and the question at hand is – should this person be allowed to petition the courts to restore his or her firearm rights?

This is an ongoing debate among politicians and one that should not be ignored or swept under the rug. Many good, decent law abiding citizens who made a stupid mistake in the past when they were young and immature, are seeking to restore their rights.

This argument shouldn’t be confused with what’s happening currently in our nation.

It seems that there is a mass shooting every other week in America and it seems one of the immediate responses is to “ban guns.” Why? Well, guns were used to kill the victims. Many argue that having stricter gun laws would stop these mass shootings. There may be a valid argument for that. As the media reports more mass shootings the debates continue.

Whether you believe in banning guns or not banning guns, we can ALL agree on the fact that we don’t want guns in the hands of those who want to do harm to others.

At WipeRecord, we help those looking to get their gun rights back – or better known as “restoring firearm rights.” As an expungement and record sealing firm, we can help our clients wipe their past records clean, if they are deemed eligible to have this service performed based on the state and county where the past offense(s) occurred. To learn more, please contact us at 844-947-3732 or get started today with our free, secure, confidential eligibility test here: WipeRecord.com/eligibility-test.