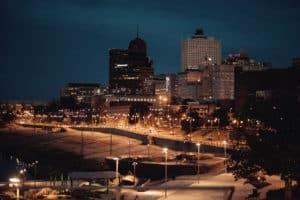 Memphis Mayor Jim Strickland is doing his part to give those with a criminal past a second chance. Mayor Strickland gave a recent news conference stating his goal to help non-violent offenders pay for record expungements through his Better Memphis Fund. “Expunging people’s record is important in so many ways,” Strickland says. “It helps people find a job or a better job. And then secondly it just helps with self-esteem.”

Local non-profit Just City focuses on expunging criminal records, and executive director Josh Spickler says that he and his organization have been working on getting expungements for non-violent offenders since the organization was founded two years ago. “We have helped more than 175 people get expungements since we’ve been around. We’ve paid $450 for each one of those people,” Spickler says. “We got a bill through the general assembly this year that will reduce some expungements from $450 to $280. We also got a bill through that will expand eligibility to two offenses instead of just one.”

Even though Spickler supports Mayor Strickland’s drive to pay for expungements, he says this is a goal Just City has been working on when they originally started, and that they will continue to fight for fair rights. “We really need to take a comprehensive look at expungement and what it could mean if we really let people get back to work after they’ve paid their debt.”

District Attorney General Amy Weirich and Representative Raumesh Akbari have stated their support in Strickland’s vision. “They have gotten their life together and they are not part of the problem,” says Weirich. “Everyone talks about what it’s gonna take to change our community and move the needle. This is one way you can help do that. By writing a checklist and helping someone clear their record.”

Mayor Strickland announced via his Facebook page that the Better Memphis Fund will be matched dollar-for-dollar up to a total of $25,000, as a result of a grant from the Speer Charitable Trust. It was also announced that a fundraiser for the Better Memphis Fund will be held June 5th from 6 to 8 p.m. at the Hattiloo Theatre. It will be the second fundraiser the program has held to help its efforts in paying for expungements. (Source: Local Memphis)