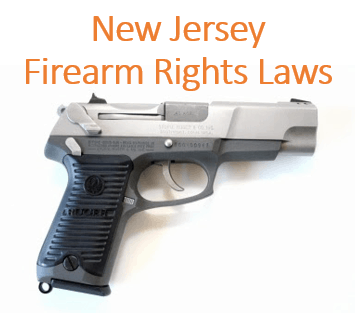 New Jersey law prohibits certain individuals from possessing firearms, such as those convicted of aggravated assault, burglary, unlawful use, possession, or sale of a controlled substance, domestic violence-related crimes, and others listed in the New Jersey Code of Criminal Justice, Title 2C: 39-7. The State has some of the most restrictive gun laws in the country, so it is important to understand how to lawfully exercise your rights.

In New Jersey, all prospective firearm purchasers must obtain either a permit to purchase a handgun, or a Firearms Purchaser Identification Card from local law enforcement or the New Jersey State Police prior to buying a firearm. Reasons for denial include having been “convicted of any crime” which has a potential sentence of imprisonment in excess of 6 months, a conviction of a “disorderly persons offense” involving domestic violence, drug and alcohol abuses, and more. New Jersey is designated as a “may issue” state, meaning local officials or the State Police have broad discretion in issuing a concealed carry permit to an applicant. Applicants must show a “justifiable need” to be issued a carry permit.

The New Jersey firearm application allows expunged records to be omitted from being disclosed. However, under federal law, those convicted of domestic violence will still be barred from gun ownership. Even if you expunge the offense under New Jersey law, it would not clear you federally. For all other expungements in New Jersey, it would no longer be necessary to disclose such convictions on a firearm application. The application does ask whether one is dependent upon the use of drugs or alcohol. It also requires applicants to disclose whether they have ever had a firearms license refused or revoked in New Jersey or any other state. In this case, individuals who have applied, been denied, and then received an expungement must explain that on the application.

If you can’t expunge each of the convictions that are restricting your firearm rights, your only available option for relief would be a pardon from the Governor. While this may be an option for some, it should be noted that New Jersey has traditionally issued very few pardons and hence, our firm does not typically offer this as a service. You can always download the forms for Executive Clemency (also known as a Governor’s Pardon), follow the instructions.

Related content: How to Restore Your Firearm Rights in New Jersey

Navigating firearm laws in New Jersey can be a difficult task, especially with a past conviction on your record. The good news is that expungements are available to those that wish to remedy past mistakes. Furthermore, it’s possible that there will soon be a trend toward looser gun laws for the State. In a recent move New Jersey Attorney General, Christopher Porrino, admitted that his state’s stun gun band is a violation of the Second Amendment. Moreover, the current political status of the Trump administration could loosen gun laws for all Americans. Trump has supported the signing of nation-wide concealed carry legislation, so that a permit holder from Colorado or Idaho would legally be able to carry a gun for self-defense in New Jersey, for example. He has also voiced his opinion on removing restrictions for guns that can carry high-capacity magazines for loading more ammunition. These potential acts will certainly be met by a good amount of push-back from the gun control lobby. Regardless, changes in laws take time, so be sure to understand the firearm laws of your state to enjoy you Second Amendment right.