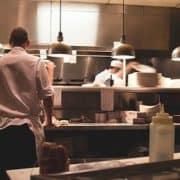 The owner of Hot Chicken Takeover, a popular Columbus restaurant, has made headlines in hiring former criminals as employees. The restaurant’s founder, Joe DeLoss, appeared on Megyn Kelly Today last week, talking about his business. He mentioned the restaurant’s growth and employment model, which includes hiring people who have found it difficult to get a job because of a criminal record. Furthermore, Mr. DeLoss attributes much of the company’s success on his decision to accept ‘alternate resumes.’

As many as 1 in 3 Americans have some sort of a criminal record. Thus, many individuals understand how a record can cause many issues. Mr. DeLoss opened Hot Chicken Takeover in 2014 with his wife. Today, they own three locations and have around 200 employees. “Because we believe a criminal record is often about circumstance, not character…we’re giving an opportunity for somebody to demonstrate a different story for themselves,” DeLoss said.

A current employee was interviewed, stating “Every day I come in here I feel accepted.” He further noted how difficult it was trying to re-enter the workforce with a criminal record. “I kind of lost hope a little bit, found myself back in the streets.” This person’s story is just one of many stories with similar scenarios, but different endings. Many fast food restaurants conduct background checks. Also, jobs requiring certain licenses, barbers, or athletic training jobs all are generally filtered by a background check.

Work with a Criminal Record

It’s good to see a business succeed, and be able to hire qualified workers – aside from their past mistakes. Finding work with a criminal record can be difficult. Additionally, it may be difficult to obtain housing, apply for licenses, or pursue higher education. Obtaining an expungement or record seal can greatly improve your ability to get past a criminal record. Depending on the state, you may even be eligible to restore certain rights that were lost, such as firearm rights. It’s best to consult an attorney experienced in such matters for more information.