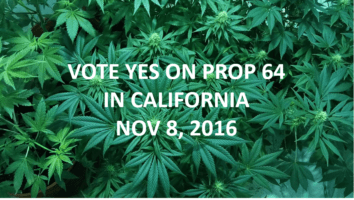 What is the California Proposition 64 Initiative?

Since it has passed, Proposition 64 has made marijuana legalization in California legal. The initiative on the November 8 ballot asked residents to decide how much cannabis Californians should be allowed to carry, whether they should be able to grow it in their homes and what, if any, penalties consumers should face going forward. Prop. 64 also ends most marijuana arrests and allows judges to reduce sentences for those incarcerated. Furthermore, and just as significant, it allows those living with criminal records to apply for a record expungement.

The ballot measure could be a beacon of hope for thousands of Californians with a criminal record because of a charge from cannabis possession or use. This is substantial because about 15,000 to 20,000 people in California are arrested every year for misdemeanor and felony marijuana charges, according to a recent report by the Drug Policy Alliance, a national advocacy non-profit. A criminal record can limit one’s ability to get a job, acquire housing, obtain a professional license, and enjoy various other important opportunities. Under Prop. 64, Californians will no longer be fated to these negative consequences because of a minor marijuana offense.

The courts are currently overwhelmed with the amount of non-violent drug offense cases. This legislation could alleviate pressure on law enforcement and the courts by reducing the penalties for minor marijuana-related offenses as set forth in the act. Some opponents of the ballot measure argue that prior legislation already makes criminal punishment for marijuana-related crimes mild. This argument does not consider the fact that a criminal record, along with its stain, remains with an individual for life. Under the this new law, many Californians arrested for misdemeanors by possessing or growing small amounts of marijuana, or using marijuana without a medical card could potentially be given the chance to appreciate a clear record.