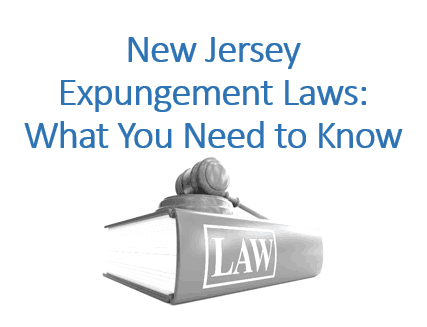 What You Need to Know About New Jersey Expungements

In New Jersey, your criminal records are readily available to the public regardless of whether or not you were actually convicted of a crime. This can make it incredibly difficult to pass background checks for employment, housing, and various licenses . Fortunately, New Jersey laws provide for criminal record expungement in many cases. An expungement would remove and isolate all records on file within any court, detention or correctional facility, law enforcement, criminal justice agency or juvenile justice agency. Generally, an expunged offense is considered not to have occurred, and you may legally state that your criminal record is clean once all charges and convictions are expunged. The record may only be used by government agencies in very limited circumstances.

The process of expunging a New Jersey criminal record differs depending on whether you have a conviction for an indictable offense (generally an offense punishable by six months of jail time or more), a disorderly persons offense (generally an offense punishable by less than six months of jail time), or for a violation of a municipal ordinance. Motor vehicle convictions may not be expunged, which includes driving under the influence of alcohol or drugs. Individuals who have successfully completed drug court or court-ordered rehabilitation may be eligible to expunge their entire record of arrests and convictions. Furthermore, individuals who were victims of identity theft may also be eligible to expunge or delete certain arrests and convictions from their record.

Expungement of Arrests Not Resulting in Conviction in NJ

A recently passed law in New Jersey provides that when a person has been arrested or held to answer for a crime or any lesser offense and the proceedings against the person were dismissed, the person was acquitted, or the person was discharged without a conviction or finding of guilt, the Superior Court must upon application from the person, order the expungement of all records relating to the arrest or charge at the time of the dismissal, acquittal, or discharge. Under the law, if the proceedings took place in a municipal court, the municipal court must provide the person, upon request, with appropriate documentation to transmit to the Superior Court to request expungement pursuant to procedures developed by the Administrative Office of the Courts. Upon receipt of such documentation, the Superior Court must enter an ex parte order expunging all records and information relating to the person’s arrest or charge.

The law provides that an expungement under section 4 shall not be ordered where the dismissal, acquittal, or discharge resulted from a plea-bargaining agreement which resulted in the conviction of other charges, but this bar does not apply once the conviction resulting from the plea agreement is expunged.

A person with an expungable indictable offense on their record may expunge the record of that conviction so long as he or she has not been convicted of more than two disorderly or petty disorderly persons offenses in New Jersey or any other state. A petition for each of these offenses may be separately filed in the county in which the conviction was entered. In most cases, you must wait at least 10 years from the date of the most recent conviction, payment of fine, completion of probation or parole, or release from jail—whichever is later—before applying. If you have been convicted of two or more indictable offenses, whether in New Jersey or any other state, you may not expunge your criminal conviction record.

New Jersey provides the early expungement of indictable offenses in special situations, titled “public interest” expungements. These are cases where a person’s criminal record is cleared because it is in the public’s interest to do so. Those that fall into this category may apply sooner than 10 years if the following apply:

The expungement of “public interest” indictable offenses gives great discretion to judges that are asked to hear the case. To petition for this expungement, courts require detailed documents of the previous conviction, and it can be tough to find and gather these copies. It is important to demonstrate to the court that you deserve the expungement and that it is otherwise within the public’s interest to remove the record of the offense.

A record of a municipal ordinance violation may be expunged unless the individual was convicted of a prior or subsequent indictable offense in New Jersey or any other state, or if convicted of a disorderly or petty disorderly persons offense on more than two occasions. The waiting period is two years from the date of conviction, payment of fine, satisfactory completion of probation, or release from jail, whichever is later.

The following is a list of convictions that cannot be expunged:

In the case of convictions for the sale or distribution of a controlled dangerous substance or possession thereof with intent to sell, expungement shall be denied except where the crimes involve:

A person who was 21 or younger at the time of the offense of possessing a controlled dangerous substance, or of selling, distributing, or possessing marijuana or hashish with the intent to sell, and after at least one year following conviction, termination of probation or parole or discharge from custody, whichever is later, may be eligible to apply for an expungement if:

To be eligible, the following must also be true:

Certain juvenile crimes that can be expunged include:

In summary, to get a criminal record expunged in New Jersey, you must not have any charges pending or otherwise still open, and you must have never been granted an expungement of an indictable offense in New Jersey or any other state. Finally, if your case was dismissed as a result of completion of a supervisory treatment or other diversion program, you must indicate the nature of the original charge, the court of disposition, and the date of disposition. The process of expunging a New Jersey record can be a difficult undertaking, especially without the assistance of an experienced attorney.