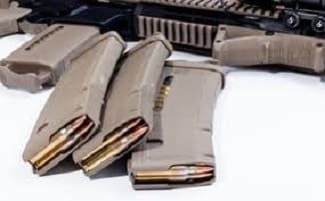 California continues to face legal challenges to new gun control measures. In 2000, the state banned the sale of firearm magazines that can hold more than ten rounds. Until recently, residents who already possessed such large-capacity magazines could keep them. However, California passed Proposition 63 in November, which requires background checks to purchase ammunition, bans possession of high-capacity magazines and other gun-safety efforts. This put thousands of Californians who still have large-capacity magazines in a difficult scenario. The legal options for owners of the magazines include transferring them to a federally licensed gun dealer, destroying them or turning them over to law enforcement.

As expected, civil-rights groups challenged the confiscation in federal court. By late June, Judge Roger T. Benitez of the Southern District of California blocked the measure from going into effect. In his court opinion, the Judge concluded that proponents of the law can show no evidence that limiting magazine sizes will improve the public safety. He wrote that “public safety interests may not eviscerate the Second Amendment.” Judge Benitez applied the test laid out in the infamous D.C. v. Heller case, stating “The statute hits close to the core of the Second Amendment and is more than a slight burden…the statute is adjudged an unconstitutional abridgment.”

No matter what side of the argument you agree with, the law would have been difficult to implement. As the Judge noted, “hundreds of thousands, if not millions of otherwise law-abiding citizens will have an untenable choice: become an outlaw or dispossess one’s self of lawfully acquired property. That is a choice they should not have to make.” Essentially, the law could have suddenly labeled a large group of upstanding Americans as criminals – should they have chosen not to dispose of their firearm magazines.

In another setback for California gun-control advocates, the Los Angeles City Council voted 12-0 on Tuesday to reverse a ban on “ultracompact” guns. In the story reported by the L.A. Times, the initial ban on selling small guns was imposed over 15 years ago. Gun rights groups argued that smaller guns are useful for the self-defense of women and disabled people. Additionally, the law was preempted by California State law, which governs what kinds of guns can be sold. Now, dealers are no longer barred from selling guns that measure up to 6.75 inches in length, and 4.5 inches in height, as well as holsters to carry them. No one had yet been prosecuted under the old law. Yet, it was cited that a North Hollywood leathersmith had been threatened with prosecution. His crime – selling holsters that fit smaller guns.

The future of gun laws in California is still uncertain. The state legislature often passes various laws to limit the possession and usage of firearms. California courts are constantly hearing challenges to these laws, often backed up by the NRA and a host of other gun rights groups. Furthermore, Congress is considering a concealed carry reciprocity bill, which would allow permit holders to lawfully carry nationwide. Visit our blog for more updates on California gun laws and other news related to firearm rights.