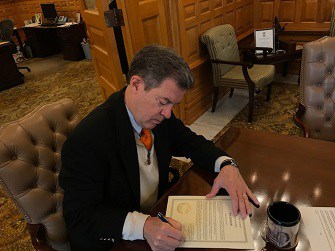 Kansas Gov. Sam Brownback has issued his first pardon in almost seven years in office. The pardon granted was for Mark Schmitt, who was convicted of felony theft as a college student in 1994. Schmitt had made a false insurance claim for $1,551 while attending college in Ottawa. He paid his court-ordered restitution, and has his sentence expunged in the Franklin County District Court.

Governor Brownback denied a total of 72 applications for clemency as governor. Since the beginning of his term as governor in 2011, Brownback has never pardoned a state offense – until now. “This request for clemency was unanimously supported at all levels of the process,” Brownback said in a statement. “He has demonstrated he is a man of character, having already paid his debt to society, having had his criminal record expunged, and having worked through the process of requesting a pardon.”

Schmitt was appreciative of the Governor’s response to his application. “I am very grateful to Governor Brownback and his administration,” Schmitt said. I would like to live my life privately and not be made a media show.” Although the Governor has been reluctant to grant pardons, he has asked Trump to pardon two Kansas men convicted of federal firearms violations. These crimes can only be pardoned by the executive branch. Currently, Trump has pardoned just one person – former Arizona Sheriff Joe Arpaio for his criminal contempt conviction.

The most common way to remove a criminal record is through an expungement or record seal. A pardon, sometimes called “clemency,” is another common method of curing a criminal. Many people are familiar with the President’s authority to grant a pardon. However, the President only has this authority for federal crimes. So, the power to pardon state crimes is vested in governors. A pardon or expungement can be extremely valuable in many ways. For more information on obtaining a pardon, or to purchase a Texas or California pardon e-Book, visit our website.